Get a Free Quote
Call Us

Get a Free Quote

Everyone knows that asbestos can present serious health issues, including severe respiratory diseases and fatal cases of cancer.

That’s why so few companies in Brisbane are willing to work in the potentially dangerous asbestos roof replacement field – and there are even fewer since Queensland’s stringent new asbestos removal laws have come in.

Those who can safely remove asbestos roofs in strict accordance with Australian Standards AND quickly and professionally replace it are rarer still. This is why it’s crucial you place your trust in an experienced roofing contractor and asbestos roof replacement company.

If you’re worried about the condition of your asbestos roof, make it our problem.

Why you WILL need to replace your asbestos roof

If your home was built before 1982, before asbestos was proven to be unsafe, chances are you may soon have a problem, if you haven’t already.

When your asbestos roof was first built, it was one of the strongest roofs around, due to the fact that bonded asbestos sheeting is 96% fibro cement and 4% asbestos.

Because asbestos roofs were built ‘back in the day’ when quality really mattered, they were built to last. Your asbestos roof most likely has up to 6 ribs per sheet for added strength and has been totally sealed top and bottom on manufacture. The trouble is that over time – anywhere between 20 and 50 years – Queensland’s harsh climate has caused that top seal to erode. It’s inevitable that your asbestos roof sheeting has cracked, split and grown mould over the years.

As a result, the roof sheets will have become brittle, weak and potentially dangerous if asbestos fibres become airborne, or worse still, if it becomes friable. Movement around the fixing points (screws & nails) can make the problem worse, and if the overlapped asbestos sheets have become loose and have been rubbing for years, the strength and safety of your roof has been compromised.

In short, your asbestos roof isn’t a problem until it becomes a problem. But when it does, it will absolutely need replacing.

As you can see from the following time-lapse video, an asbestos roof replacement needs to be completed methodically and carefully by a dedicated team of professionals.

Some of the steps we take include:

The My Home Improvements team has been replacing asbestos roofs for well over 20 years and have passed each and every audit by Government Asbestos Compliance bodies. Highest standards of workplace health and safety in Queensland.

HERE’S A DEAL SWEETENER FOR YOU

Here’s a little helping hand. we offer Finance Options
that can help you get the job done today. 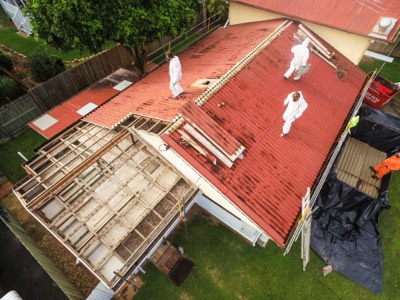 The thing that sets My Home Improvements apart from others who perform asbestos roof replacements is the fact that we can look after literally everything, from safely removing your old roof to installing your new metal roof, so that it all runs like clockwork. We have the experience to handle all types of asbestos roofing and roof removal services

We all know the challenges of trying to coordinate multiple trades/suppliers, don’t we? Well that will be OUR problem, not yours.

With over 20 years of experience under our belts, we can handle all the steps in the process so that everything runs smoothly, and nothing is left to chance. For example, you don’t want your old asbestos roof removed and then have it sitting open and exposed to the elements while you wait for your roof replacement. 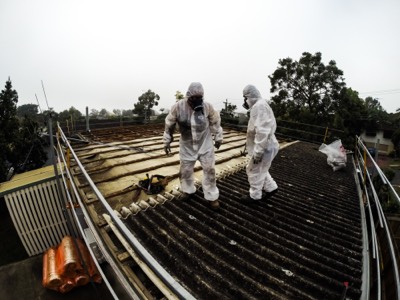 My Home Improvements obviously can’t control the weather, but we can plan around it; if it even looks like a storm is on its way, we will postpone the project.

You may also have rotten or old structural roofing timbers that need repairing or replacing. As we have a full Builders Licence, we can handle these types of tasks and more including painting, electrical, plumbing and so forth. Because we have a large, highly experienced team of professional roofing contractors, we work quicker than other less-resourceful teams.

In most cases we can actually get your old asbestos roof off, and a new one on in the very same day. If you have a larger roof, we can work on one side first, then do the other half the next day.

And if worse comes to worst, and we DO have to leave your roof off overnight, or for any length of time, rest assured it will be securely tarped or new sheeting tacked on to ensure no rain gets in.

Contact Us Today For Your
No Obligation Free Quote

Our focus is on the customer experience and building things to last. Dealing with Trades should not be hard or a daunting experience, MHI make it easy!